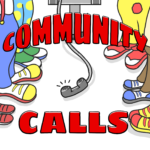 On the 2nd anniversary of Carlito’s passing, after doing an early Dwight show, we reconvened on the Dwightcord and called a bunch of random places to try and rile people up and put a smile on their faces.